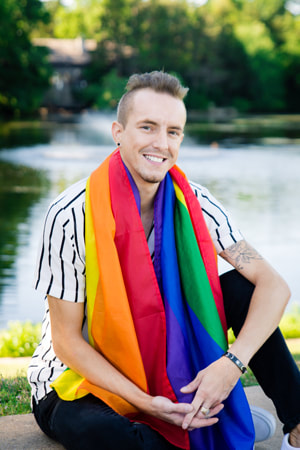 Wes Hawkins, of Ponca City, Okla., lives his life true to himself. After overcoming obstacles in both his health and personal life, he is proud to be a part of the LGBTQ+ community.

Wes was only three years old when his family learned of his Cystic Fibrosis diagnosis. His parents told him from a young age to not let his condition stop him from living his life.

Wes worked hard at making every day count. He moved to college and lived some of the best years of his life, thanks to new medicine. He was able to spend time in the beautiful outdoors tending to his yard, landscaping, reading on the patio, even running 5Ks and spending time with friends and family.

He graduated college with a Bachelors in Hotel and Restaurant Administration and began working up the ladder to become a restaurant manager.

In May 2019, Wes returned home from a vacation with friends. He prepared for a busy weekend at work. He woke up in the middle of the night and was coughing up blood. Instead of going to work that weekend, Wes spent time in two emergency rooms, saw his cystic fibrosis specialist and underwent two procedures.

Two weeks into his hospital stay, the doctor mentioned the “T” word – transplant. Wes knew that he would eventually hear he needed one – but hoped to avoid it if he could. By the next afternoon, Wes began the transplant evaluation process.

On August 8th, Wes received a call that changed his life. To his surprise, it was the lung transplant team. They informed Wes that there was a potential match and he needed to get to the hospital as soon as he could. This was Wes’ fifth offer for lungs, all not panning out to be a transplant for him.

Once he arrived at the hospital, the medical team began making sure he was healthy enough to receive a transplant. They did bloodwork, an x-ray, paperwork, and met the surgeon and anesthesiologist.

Wes received confirmation that evening the lungs were a perfect match, and at that point he was more ready than ever. He went into the surgery with a bright mind knowing he had been prayed for thousands of times and had a great feeling of comfort.

Now, Wes is approaching his three-year post-transplant anniversary. One of his biggest triumphs since receiving his transplant is living true to himself and being proud of who he is. In fact, Wes’ promise to himself, if he made it through a transplant, he would be honest with who he was and live a life he knew he deserved. Wes knew that he was receiving a second chance with this transplant, and he did not want to live with regret any longer. He found happiness in himself and is now living his best and most happy life as a proud gay man. According to Wes, this was his biggest internal struggle in life; coming out and being afraid of rejection taunted him for years. Despite fears, he found the courage in his second chance at life.

“I was given this second chance at life – and now I get to live it proudly,” said Wes. “To fellow members of the LGBTQ+ community – please register to be a donor, because we want support for ourselves, so why not have the chance to give that support and courage to others waiting to live their best life?”