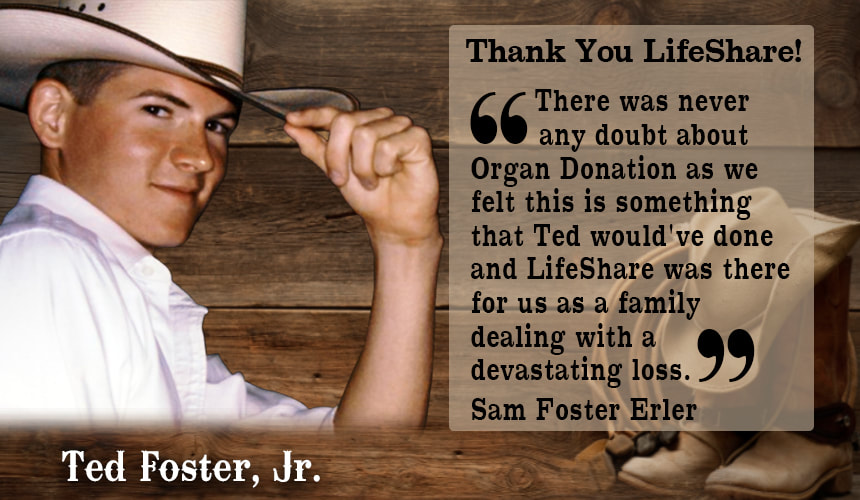 ​According to Ted’s mom, Sam, he wasn’t one to sleep in; he didn’t want to waste time. He lived life to the fullest and enjoyed everything about it. He believed in working hard and playing hard. In fact one of his favorite quotes was from author and cowboy humorist, Texas Bix Bender, "Makin' it in life is kinda like bustin' broncs: you're goin’ to get thrown a lot. The simple secret is to keep gettin' back on.”

“Ted loved animals and was always finding one to adopt,” says Sam. “He would spend his last dollar, caring for it and getting its shots. Then he would find it a good home where it would be loved and cared for the rest of its life.”

In addition to being a junior majoring in Animal Science at Oklahoma State University, Ted worked part-time at both the Tumbleweed Ballroom as Security and as Horse Care Coordinator at the Turning Point Therapeutic Riding Ranch in Stillwater.

On August 1, 2009, while working at Tumbleweed, Ted received a closed head injury in a tragic accident. His co-workers began first aid immediately. He was flown to the OU Trauma Center in Oklahoma City where he died on August 2nd.

“The staff of LifeShare was wonderful,” says Sam. “They were so kind and considerate of our family.  Trish, a coordinator with LifeShare, was just great!  She let us spend as much time with Ted as we needed and she took such good care of him. Trish allowed me to help care for him and to hold his hand.  Truly it was a blessing.”

Trish remembers this family well. “One word comes to mind as I recall taking care of Cowboy Ted. That word is fellowship. I was and will always be honored that God allowed me to be part of the fellowship that took place when Ted went to be with The Lord. As I observed many of Ted's friends and family embrace one another amidst the pain of his loss, I stood at his bedside in amazement of their steadfast faith. The love that surrounded Ted during his last hours here on earth must have brought great joy to Christ as He prepared a place for Ted in Heaven. I rejoice with Sam and everyone who loved Ted knowing that he gave the gift of life to six of his fellow ‘cowhands’ here on earth.”

By midnight, the LifeShare staff had found recipients for all of Ted’s organs and the surgery was scheduled. Sam remembers, “Our family was there and LifeShare helped us get Ted’s hand print and presented us a very nice donor medallion. My sister led us in a beautiful prayer and we got to walk as far as the elevator that went to the surgery suite. It was the most precious and beautiful passing I have ever experienced. I was there when that precious baby came into my life and I was there when he went to be with Jesus.”

“I’ve had the privilege of meeting several of Ted’s recipients, and I’d love to meet all of them at some time in the future,” says Sam. One of the recipients they have met is Jesse, who received one of Ted’s lungs. Jesse had chronic obstructive pulmonary disease and emphysema from 45 years of welding. He was in a wheelchair and on oxygen 24/7. “I’d gotten to the point where I had already decided what to have put on my headstone so that my wife would not have to do it. I only spent five days in the hospital after my transplant and I am walking four miles a day,” shares Jesse, “and I think about Ted every single day.”

Ted saved the lives of six people, not only from Oklahoma, but Colorado, Texas and Louisiana. This Cowboy’s legacy will live on as he enjoys his eternity with Jesus.

And today he joined up with Jesus
Wearing shiny pearl snaps
We sang a few gospel hymns
And then the soldier played taps
I bet he’s walkin’ with Pete
down the street paved with gold
Showin’ off his brand spanking new wings
And his barbed wire halo
Excerpt from ‘Barbed Wire Halo’
Courtesy of country recording artist, Aaron Watson