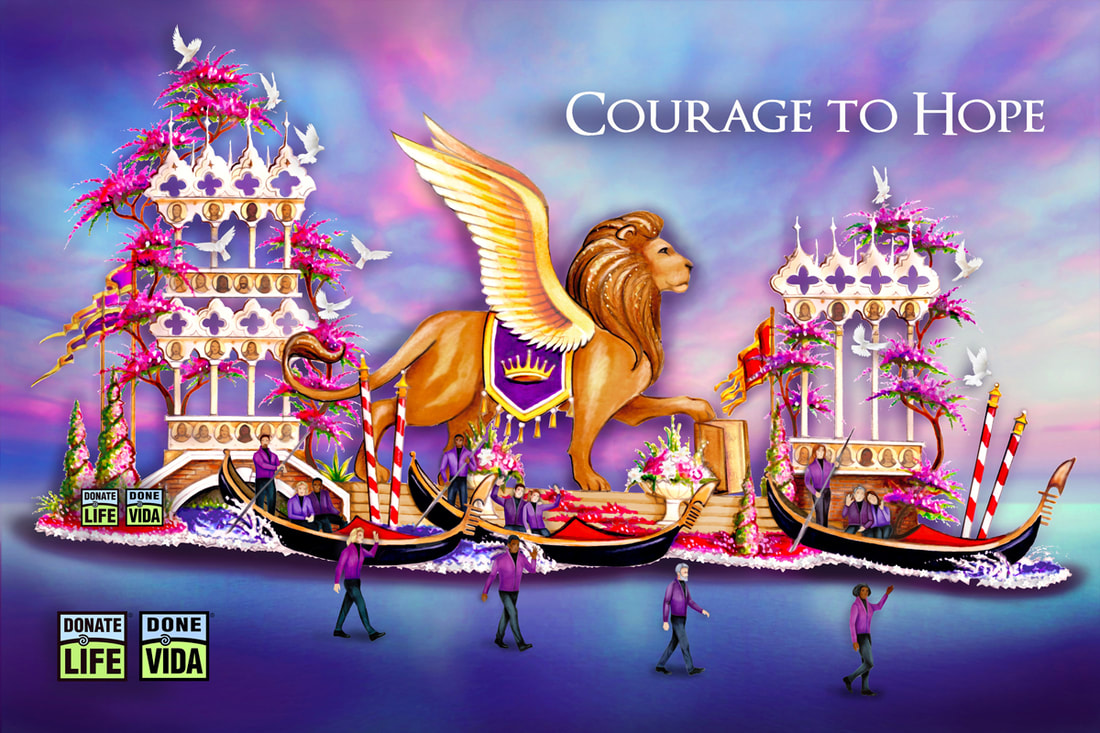 ​Two Oklahomans will be representing their state in the 2022 Tournament of Roses Parade.  Shelby Johnson, of Shawnee, and Karen Hoyt, of Tulsa, will be a part of the Donate Life Float featured in the parade.

Every year, LifeShare of Oklahoma helps sponsor the Donate Life Float in the Tournament of Roses Parade to spread the message about organ, eye and tissue donation.  As a sponsor, LifeShare is able to send one recipient to ride the float and one donor portrait to be honored on the float.

The 2022 float features stylized Venetian colonnades, inspired by the Palazzo Ducale or Doges’ Palace in Venice. These ornate porticos will be adorned with memorial floral portraits, honoring the gift of life and hope given by organ, eye and tissue donors.

Venice’s quintessential gondolas will carry organ, eye and tissue recipients, as they continue sailing in their life journey, thanks to their donors’ gifts. Living donors and recipients will walk alongside the float. A lush dedication garden features individually dedicated roses and will complete the beautiful Venetian scene, along with blue and white waves, representing the flowing Venice canals.

This January, Oklahoma will be represented by the following individuals:
This compassion spilled over into other areas of Shelby’s life. She served her community consistently, volunteering in her free time at an animal shelter and public library. One of her favorite classes in school was Leadership, and during that class, they would go to the elementary schools to read to younger students. She enjoyed this and it meant a lot to her when students would see her outside of school and recognize her.

Shelby loved school and was involved in every activity possible. She had always planned on going to college and was determined to be a good student. In fact, during her first week of kindergarten, she came home very upset that her teachers had not yet taught her to read! In middle school, she was fascinated by the ocean and aspired to be a Marine Biologist. In high school, her goals shifted, and she became deeply intrigued by the human brain and wanted to study Forensic Science.

From a young age, Shelby was never afraid to be on the stage, whether in a group or alone. She loved to perform and was a talented dancer and especially loved clogging. As the pressure of high school and wanting to devote more time to school came, she gave up dancing. She had most recently taken up photography and loved spending the day with her friends driving around taking pictures of the scenery and each other.

When Shelby turned 16 and passed her driver’s license exam, her mom, Dana, drove her to the Tag Agency. During this drive, Dana explained to Shelby that she would be asked if she wanted to be an organ donor, she shared what it all meant and asked her to think about it during their drive.

The moment Shelby came out of the Tag Agency, she proudly exclaimed, “I did it, I’m an organ donor!” She was so excited to send a picture to her dad, showing off the Little Red Heart and beamed with excitement to tell her grandparents, too.

Eighteen short months later, a tragic car crash took Shelby’s life. Because her family knew her wishes, there was no hesitation in fulfilling them.

Through Shelby’s death, the gift of life was offered to four others. One short conversation about donation made life possible for others waiting on a lifesaving organ transplant.
Karen lives every day with a grateful spirit and the positive attitude to be an encouragement to others. She has always lived a healthy life despite being born with only one kidney. Karen was active in her community as a full-time teacher, volunteer and Sunday school teacher at her church. In 2010, she learned that her liver was failing, and she was later diagnosed with the Hepatitis C virus.
​
She was sent home thinking her days were numbered. Despite this news, she clung to her faith and began eating even healthier than she had before the diagnosis. Luckily, an antiviral medication came out and she was cured of Hepatitis C by 2011 but end-stage liver failure still loomed over Karen.

Karen went back to her career as a teacher and continued to live as healthy as possible. During one of her screenings, the doctor determined that her damaged liver was not removing toxins from her blood, which diminished her mental capabilities. She also became limited on what she could do as she frequently had muscle fatigue, liver pain and joint pain.

After learning to manage her pain, Karen’s health began to worsen. When she was at her regular check-ups, the doctors found a cancerous tumor on her liver. Her doctors recommended a liver transplant, and amid the listing process, she began to make end-of-life plans with her daughter. To cheer their spirits, they began to look online at stories of hope from others who had received a transplant. Karen was encouraged and continued to eat healthy meals and walk when she could.

When Karen was fully listed on the transplant waiting list, she was grateful to think that at someone’s greatest crisis in life they would make a decision that would eventually grant her many more years to live. She was so humbled that she called her transplant coordinator and almost asked them to remove her from the list.

As she waited for a second chance at life, Karen underwent many procedures to shrink the tumor on her liver so that she could remain on the transplant waiting list. Twice, Karen was called in hopes that she would receive her liver, but neither offer was a good fit.

However, on April 13, 2015, Karen received her liver from a selfless donor and learned that her donor was the same age as many of the students she once taught in school.

Karen is a motivation to many. She encourages others waiting to receive their life saving transplant, and she spends her time teaching nutrition classes. The classes help those struggling with kidney or liver disease learn to eat better to live a healthier life. In addition, she also serves on a variety of boards and committees to help people with health needs and those in the transplant community. Additionally, since her health has renewed, Karen is thrilled to be back in the classroom teaching full-time.

Most of all, this second chance in life has given Karen the opportunity and privilege to be involved in her grandkids' lives, and she is thankful for the chance to be a sister, mother and wife.

“We are thankful to have the opportunity to honor Shelby, Karen and their families, at the Rose Parade this year,” said Jeffrey Orlowski, President and Chief Executive Officer of LifeShare of Oklahoma. “With a U.S. television audience in the tens of millions and a worldwide audience in the hundreds of millions, these individuals will not only be representing the importance of donation, they will serve as a representative of Oklahoma and the approximately 700 citizens of the state who are waiting on a lifesaving transplant.”

LifeShare encourages everyone across the state to tune-in to ABC or NBC networks watch the 133rd Rose Parade on New Year’s Day. The Rose Parade presented by Honda broadcasts live at 8AM PST on Jan. 1.