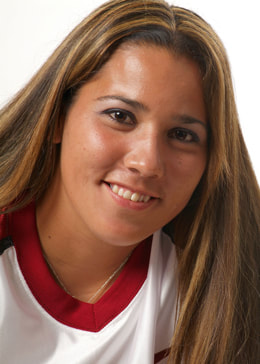 Mariee was a star softball player at the University of Oklahoma and was full of life. She was the daughter of two very proud parents, a loving sister, a caring cousin – and she greatly cared about her friends and family.

Mariee was dedicated in everything she set forth in. As a child with plenty of energy and as a part of a family who enjoyed sports, her family put her in softball.

Her first experience with softball and trying out for a team, she was ten years old and had a broken arm. She knew she wanted to play the sport, so she and her dad decided to hide the cast with a long-sleeved shirt.  Several coaches called to ask her to be on their team that day and only one coach mentioned the cast. Mariee’s parents told him that she had never played before but wanted to play softball, and he mentioned how phenomenal of a softball player she already was.
​
By the time she reached high school, Marie was participating in four sports and established herself as a star player in softball, volleyball and tennis. Her performance and awards at Escondido High School were so impressive that she earned a scholarship to play softball for the University of Oklahoma. Mariee’s first season as a Sooner came in 2003. It was just the beginning of a long and productive career.

Mariee enjoyed her four years on the OU Softball Team so much that she decided to continue in the sport and become a softball coach like her dad. In addition to coaching, Mariee became a tutor and was soon hired as a teaching assistant.
​
One evening, there was a knock at the door at the Mena residence in California, and two police officers asked to speak to the parents of Mariee Mena. That’s when her family knew something was wrong.

Mariee was involved in a motorcycle accident in Norman and had sustained severe head injuries. The officers provided all the information that they had, including the surgeon’s name and direct cell phone number. No flights were available until the following morning, and there was nothing left to do but pray. Concerned family members joined her parents and brother in their home for a long, sleepless night.

Coach Gasso from Oklahoma University picked the Mena family up at the airport the next day and took them to Mariee. Her staff was already making phone calls to arrange for a place to stay, transportation and other anticipated needs the family might have. At the hospital, teammates, players, students and parents, teachers and friends had gathered to be near Mariee. Her family was amazed at the show of support.

The news was not good, and Mariee would not recover from her injuries. But her mother praised the care that her daughter received. “The nurses were wonderful, they took such good care of her.” The entire family was permitted to stay with Mariee in the ICU room designed for two visitors. Over the course of the next three days, all of Mariee’s friends got to see her, play music and sing for her, and say good-bye. This outpouring of love was very comforting to the Mena family. 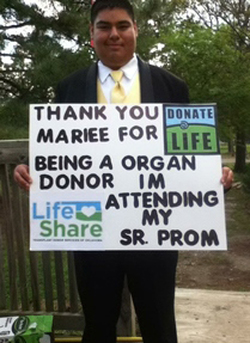 ​Our son, Curtis, wasn’t breathing when he was born. The first 30 days of his life in the hospital were a fight for survival. As his little body began to ‘wake up’, he finally came out of the coma.

Curtis defied all the odds. We watched him grow and develop. We remember when he ran on the field with his glove for his first t-ball game.

But Curtis’ kidneys eventually failed, and he started dialysis when he was 12 years old. He was at the top of the transplant waiting list when we got the call in October 2009.

When he received his new kidney, it saved his life and now he has been crowned Prom King and is graduating from High School!

We learned that his donor was Mariee, a softball star from the University of Oklahoma. Mariee’s donation not only saved Curtis, but she also saved the lives of five others.