​CURTIS KINGFISHER, SOONER FOR A DAY 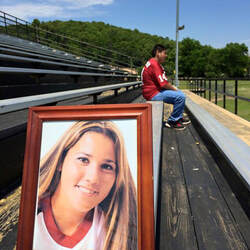 Curtis Kingfisher, son of Floyd and Rhonda Kingfisher of Salina, Oklahoma, was born with serious health challenges. At first, the doctors gave the Kingfishers no hope at all. Even when Curtis had rallied and was well enough to go home, they predicted that his kidneys would fail altogether by the time he was five or maybe six years old. Floyd remembers hearing, “He’ll never be able to grow up like a normal boy.” His reply, “I don’t care. He’s my son. I want to take him home.”

When he was 10, Curtis, who had enjoyed relatively good health, began to show the signs of kidney disease. In January 2009, 12-year-old Curtis was put on the waiting list for a kidney transplant.  A tube was surgically inserted into his stomach in March, and Curtis began home dialysis treatments two weeks later. Floyd describes his son’s condition, “He was weak, always tired and tied to a machine for 10 hours at a time.”

The ‘Make-A-Wish Foundation’ agreed to grant a wish made by Curtis that year. Since his favorite thing in the world was the OU Football Team, Curtis wouldn’t even consider a trip to Disneyland. All he wanted was to be a ‘Sooner for a Day’. Officials at the University of Oklahoma agreed, and plans for the big day were made.

Floyd Kingfisher was working maintenance at the elementary school in Spavinaw when he got the phone call. He and Rhonda loaded Curtis in the car for the trip to OU Children’s Hospital. There was a donor for Curtis and he was going to get his transplant. They checked in to the hospital on Monday, and Curtis received his new kidney the next day, on October 6th. Floyd was reading the newspaper while they were waiting in the recovery room. “There was an article about Mariee Mena and her accident,” Floyd remembers. “I think God wanted us to know who Curtis’ donor was.”

Apparently Floyd was right. Both families expressed a desire to meet, and the wheels were set in motion. On October 31st, ‘Make-A-Wish’ sent Curtis to the University of Oklahoma to be a ‘Sooner for a Day’. He toured the coaches’ offices, the Switzer Center, locker rooms and more. He met the coaches and players and was scheduled to make the coin toss at the start of the game against Kansas State.

Floyd and Curtis were sitting together on the sideline waiting for that coin toss when head softball coach, Patty Gasso, introduced herself. Her softball team was on the sideline, and she asked if they could have a photo made with Curtis. But the tears in her eyes said much more. Being close friends with the Mena family, the coach became emotional when she saw Curtis. “I just stood there and stared at him, and he probably thought ‘What is this lady doing?’” admits the coach. “I immediately felt Mariee again.”

She gathered herself and asked if Curtis would be interested in watching the softball team play a game. He could even throw out the first pitch. Floyd remembers, “The coach said she was in touch with the Mena family, and asked if we’d like to meet them someday. I told her ‘of course’.” And with that, the invitation to a softball game was accepted.

After the picture was taken, Patty Gasso quickly disappeared from the football field. She had an important phone call to make and a meeting to arrange.

The Sooner softball team met the Tigers of Missouri for a doubleheader in Norman, on March 28, 2010. Before the game, the Menas of Escondido, California, met the Kingfishers from Salina, Oklahoma. Coach Gasso, who stood in the background watching, offers these comments, “You could see Isela and her family having comfort, loving on the Kingfisher family; knowing that through their own pain, they brought joy to another family. I think Isela has such a wonderful heart that she celebrated with them.”

Curtis Kingfisher and Anthony Mena warmed up together, and both threw out a first pitch to start the game. Family members cheered and shouted words of encouragement. They could see Curtis and feel Mariee with him.

Since that time the Menas and Kingfishers have stayed in touch. The University of Oklahoma awarded Mariee with a posthumous degree at the May 2010 Convocation Ceremony in Norman. When Isela and family accepted Mariee’s diploma, Curtis and his parents were there in attendance. 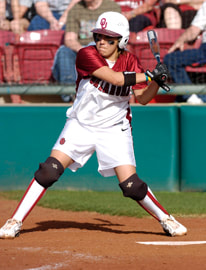 The OU Softball Team has been a perennial powerhouse in the Big 12 Conference. Following appearances in the Women’s College World Series in 2003 and 2004, the team finished the 2007 season as Big 12 Champions.  One of the standouts on those teams was senior, Mariee Mena, from Escondido, California. Earning a reputation for herself as a ‘blue-collar’ athlete, Mariee is described by Coach Patty Gasso as, “…one of the fiercest competitors to ever play in a Sooner uniform.”

At age 10 and with a broken arm, Mariee tried out for her first softball team. The cast was coming off in a couple of weeks anyway, so she and her dad devised a plan to hide it underneath long sleeves. Afterward, the one coach who spotted the cast called the Mena family on the phone, but he didn’t reprimand them. Isela explains, “He praised Mariee’s exceptional ability and predicted that she would become a phenomenal softball player.”

By the time she reached high school, Marie was participating in four sports and established herself as a star player in softball, volleyball and tennis. Her performance and awards at Escondido High School were so impressive that she earned a scholarship to play softball for the University of Oklahoma. Mariee’s first season as a Sooner came in 2003. It was just the beginning of a long and productive career.

Mariee enjoyed her four years on the OU Softball Team so much that she decided to continue in the sport. “Adam coached her when she played for the San Diego Renegades,” shares Isela. “Mariee got that nurturing from her dad, and she continued it because she loved coaching.” In addition to coaching, Mariee became a tutor and was soon hired as a teaching assistant at Windsor Hills Elementary in the Putnam City school district.

Mariee’s younger brother, Anthony, played football in the Fall of 2009. During football practice he sustained an injury to his knee that required surgery. Mariee had the same surgery on her knee when she was in high school, and she was concerned about him. The day of his surgery, October 2, 2009, Mariee called Anthony early. Isela remembers, “She told him what to expect, talked him through the whole week, and she told him that she loved him.” Mariee called back twice during surgery and again around 4:00 p.m. after the procedure was over.

Back home that evening, Isela was in the living room and Adam was helping Anthony on and off the passive motion machine in the bedroom. There was a knock at the door, and two police officers asked to speak to the parents of Mariee Mena. Isela shares, “That’s when you know. Your heart just falls. Something is wrong.”

Mariee was involved in a motorcycle accident in Norman and had sustained severe head injuries. The officers provided all the information that they had, including the surgeon’s name and direct cell phone number. No flights were available until the following morning, and there was nothing left to do but pray. Concerned family members joined Adam, Isela and Anthony in their home for a long, sleepless night.

The phone rang at Patty Gasso’s house around midnight. An early morning phone call regarding a player isn’t all that uncommon for a head coach, but this call was different. The coach explains, “As soon as I heard that Mariee was in an accident, I had an absolute sick feeling in my stomach. I immediately got out of bed, got dressed and went down to the hospital.”

Coach Gasso picked the Mena family up at the airport the next day and took them to Mariee. Her staff was already making phone calls to arrange for a place to stay, transportation and other anticipated needs the family might have. At the hospital, teammates, players, students and parents, teachers and friends had gathered to be near Mariee. Isela was amazed at the show of support. “It was breathtaking, it was a huge crowd.”

The news was not good, and Mariee would not recover from her injuries. But Isela praised the care that her daughter received. “The nurses were wonderful, they took such good care of her.” The entire family was permitted to stay with Mariee in the ICU room designed for two visitors. Over the course of the next three days, all of Mariee’s friends got to see her, play music and sing for her, and say good-bye. This outpouring of love was very comforting to the Mena family. Isela shares, “All of that has made such a good impact, and we are able to sleep at night.”

During this difficult time, Adam and Isela learned of a decision their daughter made. Isela recalls, “Mariee marked on her driver’s license to be an organ donor, and because she did that she made it a very easy transition for us. She was a blood donor when she was in high school, so the next step for Mariee was to be an organ donor.”
​ 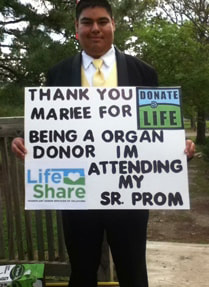