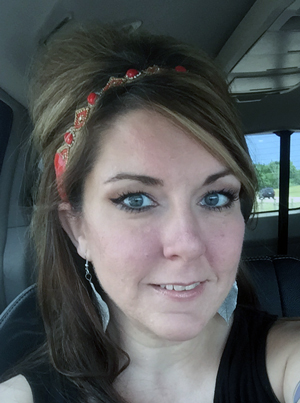 ​After surviving breast cancer and a mastectomy, one Oklahoma woman opted for a breast reconstruction in an effort to gain her life back. October 19 is national Breast Reconstruction Awareness Day (BRA Day) and LifeShare is celebrating the gifts given by tissue donors and those who have received life enhancing gifts.

Carrieann Bradway, of Oklahoma City, was carrying her first child while she watched her mother fight breast cancer at 42 years old. As Carrieann neared the same age, she became more cautious of potential cancer and mentioned the family history to her physician. She was leery of his suggested mammogram, as her insurance had not paid for one in the past. Still unsure, Carrieann decided she could not afford to ignore the suggestion and scheduled the screening.

After her mammogram, the physician called her in for an ultrasound and a few weeks later for a biopsy. On December 2, one day after the biopsy, the doctor called her during her shift at work and told her news she never thought she would hear -- she had cancer. Her thoughts began to blur and she tried to stay busy at work after hearing news that would change her life.

She went home that day and shared the news with her husband, Marc. The couple was distraught with the unknown of what would happen. Together, they decided to tell their children. A week after sharing the news, their oldest son was suspended from High School, and a few days later her youngest was suspended from grade school. The diagnosis of breast cancer began to take a negative toll on not only Carrieann but also her entire family.

Just a week after being diagnosed with breast cancer, she was working in the Intensive Care Unit and heard a young boy, who was around her sons age, crying and grieving over the loss of his mother. Reality began to set in for Carrieann and she knew her only option was to fight the cancer.

She gladly learned her tumor was only in the first stage and she would not have chemo or radiation, but she would have a bilateral mastectomy.

On December 28, Carrieann was wheeled back into surgery feeling nervous for the procedure she was about to endure. The nurse and entire staff comforted her and calmed her down. As a nurse herself, this stuck out vividly to her as she began to understand the process of helping others through their own time of grief.

She learned to rely on her husband and children to help her as she recovered. She could not raise her hands to wash or fix her hair, so together they would all take turns helping out when she needed it.

Within a month, she was back at work and found the tolls of being an Intensive Care nurse physically, emotionally and mentally demanding after surviving breast cancer. Remembering those who comforted her during a scary time in her life, she decided to move positions within the hospital to work in the Operating Room and comfort those who are about to undergo surgeries and procedures.
Once Carrieann had recovered from the surgery, she began thinking about reconstruction options. “I was only 41, and wanted to feel good about myself and feel like myself again,” she said.

In May 2016, she started the process of reconstruction. Carrieann first received Alloderm, which is derived from recovered donor skin. Alloderm essentially acts as a scaffold over time, and the patient’s cells grow into it. She then received spacers which are filled week by week with saline to prepare the body for implants.

“There’s several benefits of reconstruction. For me, it was feeling like myself again,” Carrieann said. “Opting to reconstruct after a mastectomy helps many with self-esteem from the way your clothes fit to your overall balance.”
Now that Carrieann feels like herself again, she desires to help others who have been diagnosed with breast cancer or those considering reconstruction.

“I don’t want this to be about me,” Carrieann shared. “I want to help others get their life back who are considering reconstruction after a mastectomy.”

​LifeShare is participating in its third annual Breast Reconstruction Awareness Day (BRA Day) on October 19. This is an initiative designed to promote education, awareness and access regarding post-mastectomy breast reconstruction.

“In the donation process, we are able to recover skin and tissue which can aid plastic surgeons in breast reconstruction,” said Jeffrey Orlowski, President and Chief Executive Office of LifeShare. “LifeShare is excited to celebrate BRA Day to show the community yet another example of donation saving and enhancing lives.”
​
In support of BRA Day, LifeShare will host an event open to the public at their offices in Oklahoma City on October 19 from 11:00 AM – 1:00 PM. Opportunities to donate blood or donate a bra to the YWCA will be offered in order to receive a free taco from Big Truck Taco. LifeShare is located on 4705 NW Expressway, Oklahoma City 73132.