13-YEAR-OLD ALLISON KUC IS WAITING ON A LIFESAVING TRANSPLANT 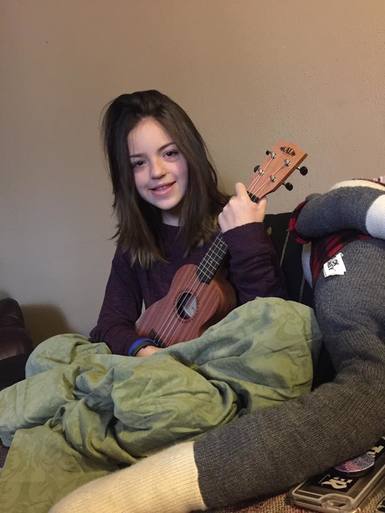 Boxes filled with dialysis equipment flood the home of 13-year-old Allison Kuc, of Yukon, Okla., who is waiting on a lifesaving transplant. Eight hours a night, Allison is connected to a machine which does the work of her kidneys.  Over the past three years, Allison has had several changes – and being diagnosed with kidney failure is one of them.

In the spring of 2014, Allison and her family had moved to their new home in Yukon. As an active pre-teen, she enjoyed playing soccer, riding her bike and participating in activities that other girls her age enjoyed doing. She was in fourth grade at the time, and took her shoes off when she got home from school. She put her feet up on her mom’s lap when she noticed her feet were swollen. The week before, she had swelling around her eyes, and her mother Pam attributed it to allergies in a new environment.

A week later, she had swelling again and her legs were huge.

Pam, a nurse and a mother, knew something was wrong. She took her to the doctor, who originally thought it was a virus or blood clots. While Allison was getting her blood drawn, she passed out. After running tests in the lab, the doctor sent them immediately to the hospital where a team of medical professionals would meet her.

Allison was diagnosed with Minimal Change Disease, which is a kidney disease, and doctors said she would grow out of it and recommended watching her diet along with her salt intake for the next week in hopes that she would go through remission. She was also given medication which quickly changed how she looked and her weight fluctuated quite a bit.

Within a week, Allison hadn’t gone through remission. The doctors ordered a biopsy on her kidney and thought she would grow out of the kidney disease. Throughout the next month, Allison was hospitalized six more times.

During one of those hospital visits in April 2015, the family found a new doctor who ordered a biopsy with a few tests which determined that Allison had Nephrotic Syndrome, a different kidney disease than was diagnosed before.

One year later, Allison’s kidney function was performing at a mere seven percent.

After learning Allison was in kidney failure, she started dialysis to keep her kidneys functioning. The doctors ultimately said she would need a kidney transplant.

For a year now Allison has waited for a call that would change her life.  In the meantime, she struggles to be active as she is winded easily and is anxious to stop her dialysis treatments so she can enjoy life like her friends.

“There are approximately 800 Oklahomans, like Allison, who are in need of a lifesaving transplant,” Jeffrey Orlowski, President and CEO of LifeShare of Oklahoma said. “Organ donation saves lives, so we encourage everyone to register to be a donor and share your decision with your family.”

Receiving a kidney for Allison would mean one thing for this mother-daughter duo: a chance. A lifesaving kidney transplant would allow Allison to go to school and feel like a normal kid, stay up late to watch television and even walk down the street without being out of breath; it would be a chance to live.

“Seeing my daughter go through dialysis treatments and not living her life like any other teenage girl is hard to watch. Watching her go through this – I can’t imagine why anyone would choose to not be a donor,” Pam Tomlinson said. “A part of you lives on in whoever you are helping. It’s awesome that we are able to save lives, so we should.”

April is National Donate Life Month. Across the United States, more than 120,000 individuals wait for an organ transplant to save their life. Thousands more are in need of tissue and corneal transplants to restore mobility and sight. Without the generous gift of more than 24,000 donors in the United States per year, many would still be waiting for a lifesaving gift.