THREE LOCALS TO BE HONORED IN THE 2016 ROSE PARADE 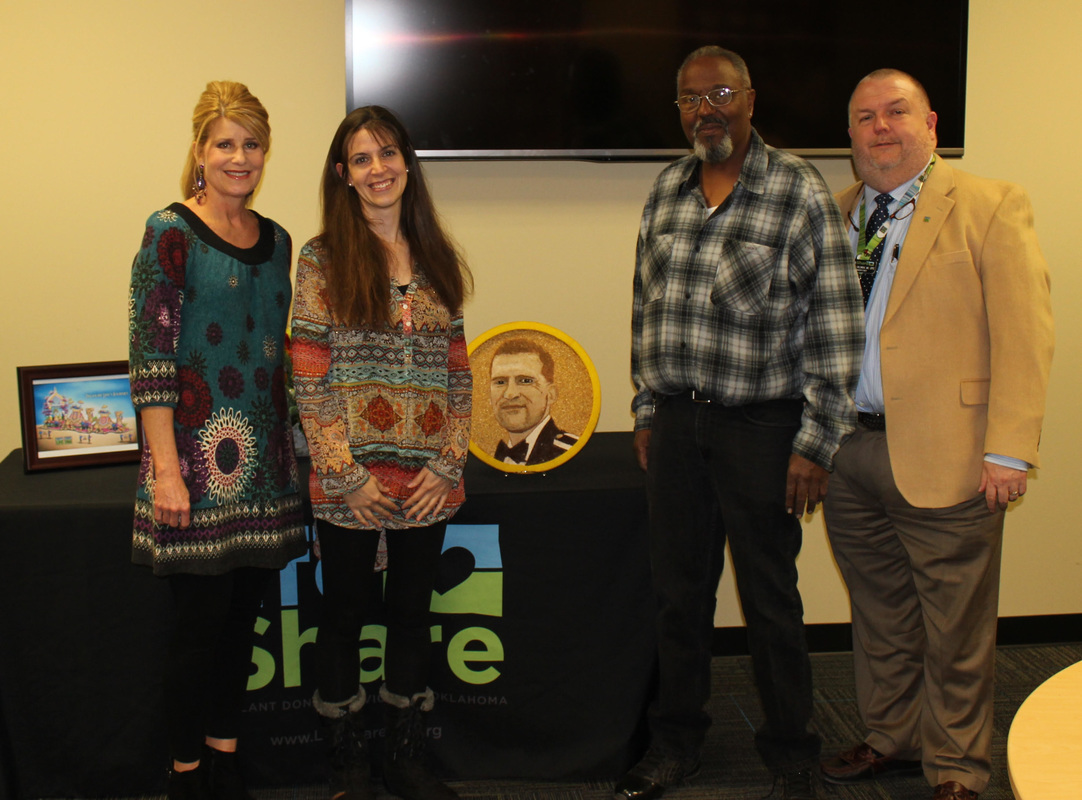 Every year, LifeShare of Oklahoma helps sponsor the Donate Life Float in the Tournament of Roses Parade on New Year’s Day to spread the message about organ, eye and tissue donation.  As a sponsor, LifeShare is able to send one recipient to ride the float and one donor portrait to be honored on the float.

As an added bonus this year, Nazih Zuhdi Transplant Institute at INTEGRIS Baptist Medical Center in Oklahoma City, also sponsored the float and is being represented by a living donor.

This January, Oklahoma will be represented by the following three individuals:

Major Kelley Chase-Organ and Tissue Donor
Kelley will be honored on the Donate Life Float as an organ and tissue donor in a floragraph.  A floragraph is a portrait of the donor, created with floral materials such as seeds, grains, spices, dried flowers and other organic materials. He is one of 60 donors to be featured on this year’s float.

Kelley’s Story
Kelley was a hero in many ways.  He served in the air force as a hero for his country.  He was a community hero joining the Oklahoma City police department.  Kelley was even a hero to his wife, Elke, and two children, Kyle and Alesia.  Even during his time of death, Kelley’s heroism was evident with his decision to be an organ donor.

Kelley had been registered to be an organ donor for years.  He and his wife had it in their will to be donors. Through Kelley’s donation, six lives were saved.  “Kelley saved several lives and I know that is exactly how he would have wanted it.”

Elke is from Belgium and there you are registered to be a donor from the time you are born. “It wasn’t even a question in either one of our minds if we would be donors,” explained Elke. “I wish it were like that here in the United States. I wish everyone would be an organ donor. If one person can save so many lives, think of the difference a country could make.”

In May 2014, Kelley was recognized as a fallen officer and Elke had the wonderful experience of meeting Kelley’s heart recipient, Ralph Howell.  Ralph and his wife, Barbara, attended the national memorial. Ralph will also be honored on the Donate Life Float as a rider.
“It is hard to believe he is gone; it has been nearly two years and I miss him every day. Kyle is a spitting image of his father,” said Elke.  “The kids are strong and brave and have been dealing with this well. Kelley would be proud of them.  Kyle and Alesia have good memories of their dad and I want those memories to stay with them.”

“Kelley was such an inspiring person; he would have wanted to inspire people with his story,” explains Elke. “So I hope that people reading this will take time to register as an organ donor.”

Ralph Howell-Heart Recipient
Ralph will also be honored this year at the Rose Parade as a one of 24 riders on the Donate Life Float.

Ralph’s Story
While at a yearly physical in 2004, Ralph’s family doctor was alarmed by the sound of his heart beat and sent him directly to a cardiologist. After several tests, Ralph was diagnosed with cardiomyopathy caused by a virus that left his heart function at just 30 percent.  For years he was treated with medication but by 2010 the disease had progressed and he had to have a pacemaker/defibrillator implanted. By early 2012, Ralph’s heart function had dropped to 5-10 percent. He had a heart pump put in and the only chance to save his life was a transplant.

At 2 a.m. on Oct. 14, 2012, just one week before his 62nd birthday, Ralph received the call that there was a new heart available for him.
Through the miracle gift of his heart transplant, Ralph is able to continue his life with his wife and children. He is now retired and able to enjoy tinkering on vehicles, riding his motorcycle and enjoying vacations with his wife. Ralph’s donor was Major Kelley Chase, who is also being honored in the 2016 Rose Parade in a floragraph portrait. Since his transplant, Ralph has created a special bond with his donor’s family and has become “Grandpa Ralph” to Kelley’s children.

Rae Ann Gossett-Living Donor
Rae Ann is a living donor and was able to help save two lives with her kidney donation.  She will be one of 12 living donors to walk alongside the Donate Life Float.

Rae Ann’s Story
Rae Ann was 53 years old when she donated a kidney to a complete stranger on Sept. 2, 2015.  Rae Ann learned about becoming a living donor from a transplant information event she was attending with her husband. Her husband was in chronic kidney failure and needed a transplant.

Rae Ann was a match for her husband, but they were willing to participate in a paired exchange with another couple who didn’t match. Rae Ann’s generosity enabled two transplants to occur! Having run in five full marathons and over 15 half marathons, Rae Ann knew she could be a perfect candidate for someone in need.

On Monday, Aug. 31, Rae Ann’s husband received a kidney from a woman named Stephanie. Two days later, on Wednesday, Sept. 2, Rae Ann gave her kidney to Stephanie’s husband. Both kidneys began working immediately and everyone recovered quickly.
​
Meeting this other couple a week after their surgeries was the highlight of the whole experience. To meet another couple who had gone through almost the exact same problems, but had the faith that things would work out was amazing. Rae Ann and her husband have met lifelong friends who they not only have a physical connection with but a spiritual one as well.

“We are honored to have three great Oklahomans represent organ, eye and tissue donation this year at the Rose Parade,” said Jeffrey Orlowski, President and Chief Executive Officer of LifeShare of Oklahoma. “With a U.S. television audience in the tens of millions and a worldwide audience in the hundreds of millions, these individuals will not only be representing the importance of donation, they will serve as representatives of Oklahoma and the approximately 900 citizens of the state who are waiting on a lifesaving transplant.”

LifeShare encourages everyone across the state to tune-in to watch the 127th Rose Parade on New Year’s Day.