LIFE OR BREATH: ONE MAN’S JOURNEY TO A SECOND CHANCE AT BOTH
LIFESHARE CELEBRATING NATIONAL DONATE LIFE MONTH​

Wes Hawkins, of Ponca City, Okla., was three years old when his family learned of his Cystic Fibrosis diagnosis. His parents told him from a young age to not let his condition stop him from living his life.

Wes worked hard at making every day count. He moved to college and lived some of the best years of his life, thanks to new medicine which turned his life around. He was able to spend time in the beautiful outdoors tending to his yard, landscaping, reading on the patio, even running two 5Ks and spending time with friends and family.

He graduated college with a Bachelors in Hotel and Restaurant Administration and began working up the ladder to become a restaurant manager.

In May 2019, Wes returned home from a vacation with friends. He prepared for a busy weekend at work. He woke up in the middle of the night and was coughing up blood. Instead of going to work that weekend, he spent time in two emergency rooms, saw his cystic fibrosis specialist and underwent two procedures.
Two weeks into his hospital stay, the doctor mentioned the “T” word – transplant. Wes knew that he would eventually hear he needed one – but hoped to avoid it if he could. By the next afternoon, Wes began the transplant evaluation process.

On August 8th, Wes received a call that changed his life. To his surprise, it was the lung transplant team. They informed Wes that there was a potential match and he needed to get to the hospital as soon as he could. This was Wes’ fifth offer for lungs, all not panning out to be a transplant for him.

He yelled to his mom to come down the hall. She came running, thinking something was wrong. Wes exclaimed, “Mom, I got the call!” With confusion, she said, “what call?”, and Wes, with a ton of emphasis said, “The call!”. Within a few minutes, their bags were packed, and they were headed to the hospital.

Once they arrived at the hospital, they began making sure he was healthy enough to receive a transplant. They did bloodwork, an x-ray, paperwork, and met the surgeon and anesthesiologist.

Wes received confirmation that evening the lungs were a perfect match, and at that point he was more ready than ever. He went into the surgery with a bright mind knowing he had been prayed for thousands of times and had a great feeling of comfort. 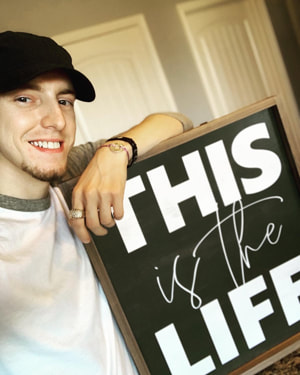 Now, Wes is almost one-year post-transplant. One of his biggest triumphs would be returning to the gym and actually making progress. He was curious to see if he could run – and he learned that it was such a freeing experience after being held back for many years because of poor lung function. He has future plans of travel including visiting London and Ireland where his family originated.

“Who knows what else might peak my interest,” Wes said. “I was given this second chance at life – and now I get to live.”
​
April is National Donate Life Month. Across the United States, more than 115,000 individuals wait for an organ transplant to save their life. Thousands more are in need of tissue and corneal transplants to restore mobility and sight. Without the generous gift of more than 30,000 donors in the United States each year, many would still be waiting for a lifesaving gift.