"On the night of my son's ATV accident which tragically killed upon impact, I asked the nurse if Jayce could be a donor. The answer was YES! I was not familiar with Life Share of Oklahoma who handled the process but quickly became a big supporter of their organization. While everyone goes on with life and families are still grieving, LifeShare continually mentored me through this painful time. They truly care about the donor families. I can honestly say that I believe LifeShare of Oklahoma actually saved my life through the loss of my son with all of their events and activities I still attend ten years later."

​No challenge was too big or too small for Jayce 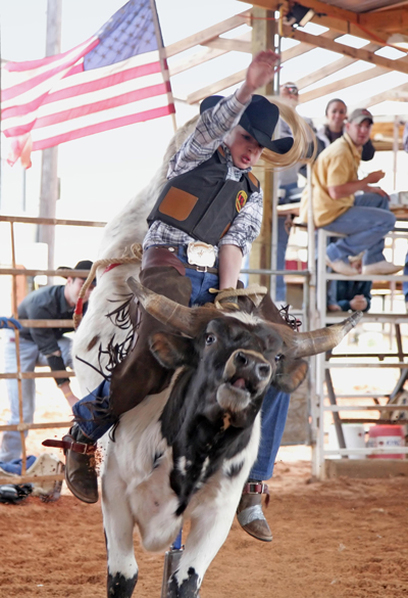 Jayce climbed over the top rail of the bucking chute and eased down onto Gideon’s back. He wrapped the braided rope tightly around his left hand and pounded it with his fist until it cinched down. After a few moments of settling in, Jayce took a deep breath, looked at the chute boss and nodded. As the gate flew open, the 1300 lb. bull exploded from the chute in a mass of flying hooves and horns. Eight seconds later Jayce Sheffield hit the dirt running and headed across the rodeo arena to the safety of the steel fence. With a score of 74, his birthday ride had been a great success. He grinned up at Jimmy Jones, owner of the Cross J Events Center, and predicted, “I’m going to be very famous one day.”

Twelve-year-old Jayce Ray Sheffield grew up on the family’s cattle ranch, just north of Wewoka, Oklahoma. The youngest of three children, Jayce had been riding horses since he was three and rode his quarter horse, Pepper, every day after school. “Jayce helped his dad, Tony, raise and work the cattle since he was big enough to go along,” explains his mother, Paige. Along with Pepper, a brown Kelpie (Australian herding dog) named ‘Jake’ was a faithful companion since he was a puppy. “Jake slept in bed with Jayce, under the covers and head on the pillow,” shares Tony.

A sixth-grader at Wewoka Middle School, Jayce played football, baseball and basketball. He also played the drums for two years in the school band. As a fifth-grader he was the only student in his class to earn the Presidential Physical Fitness Award. Jayce trained at home to prepare for the rigorous testing. “It was something that I was really proud of for him, because he worked very hard to complete that for himself,” says Paige.

Jayce found inspiration in many places. His rodeo heroes included professional bull riders like Jody Newberry, Cody Whitney and his own dad, Tony. The walls of his bedroom were covered with posters of his favorite teams and athletes, including the New York Yankees and the Oklahoma Sooners. Closer to home, Jayce loved to watch Wewoka High School basketball games and served as the waterboy for the high school football team.

Hard work and determination helped Jayce achieve his goals. “Whatever sport he was in at the time, he wanted to be the best,” says Tony, adding “No challenge was too big or too small for Jayce. He wasn’t afraid of anything. He was going to be a major league baseball player or a professional bull rider – or both.” Paige remembers Jayce telling them, “One of these days, I’d like something in town named after me.”

Like most twelve-year-olds, Jayce enjoyed a variety of activities. Besides team sports, his other favorites included fishing, paintball, karate, golf, Boy Scouts and skateboarding. Jayce, along with several of his classmates at school, served on a committee to get a skate park built in Wewoka. Paige remembers, “The school principal let the kids out one day to tour all these different skate parks in Oklahoma and get some ideas. We had already gotten approval from the City Council in July of 2005 about this piece of property in town, and we were ready to do some fundraising.”

Three days after his birthday ride, Jayce and Tony applied rosin to Jayce’s new bull rope. They talked about the bull-riding event coming up that weekend. Since the long dry spell made it necessary to check the water trough out in the pasture more often, Jayce offered to go water the cattle when they finished with the rope, around 6:00 p.m. Tony remembers saying, “Okay, leave the gate open behind you, and I’ll be over there in a few minutes.” Jayce hopped on his four-wheeler and headed out of the driveway toward the east pasture.

Paige and Tara, Jayce’s older sister, were in the house when Tony told them he was going to give Jayce a hand. “I drove over to the field and I could see… half a mile before I got there… I could see the four-wheeler up on its side. I called Paige on my cell phone as I was flying down through there and told her to call an ambulance and get them across the road,” recalls Tony. “Something told me we needed an ambulance.”

Tony was unable to see Jayce until he ran up to the four-wheeler. He remembers, “The metal luggage bar was across Jayce’s neck. I rolled it off him and started CPR until Paige and the paramedics got there. I wasn’t getting a pulse; there was no breathing, nothing.” Paramedics arrived within minutes and continued CPR in the ambulance until the Medi-flight helicopter from Seminole landed in the pasture nearby. Tara began calling friends and family members. Older brother, Joshua, and his wife, Wendi, left immediately from their home in Moore.

“At first the paramedics told us they were flying Jayce to Shawnee, so we got in the car and headed that way,” says Paige. “A friend of ours, who used to be a policeman, got us on the phone about halfway there and said they were stopping in Seminole. They already knew by then that he was gone.” By 7:30 p.m. the doctors in Seminole hospital confirmed that Jayce’s neck was broken. Tony remembers, “According to the doctors, it was instant and painless.”

As the waiting room filled with family and friends, Tony and Paige remained by Jayce’s side, still in shock from the trauma of the last two hours. Their outgoing and energetic son now lay in a hospital bed, quiet and still. Tears flowed during the heartbreaking silence. Paige recalls, “We were just sitting there with him and it crossed my mind… Can we donate? You know, his organs and everything?” The family soon learned that Jayce could donate his corneas, heart valves and tissues. Later that night, as Tony, Paige and Tara made the drive home, Paige prayed, “God, if you’ve taken Jayce and it’s his time, please use his life for the good.”

The Sheffields have found comfort in Jayce’s donation. Tony explains, “I think it just keeps him going, knowing part of him is still out there.” Paige agrees, “Jayce would have wanted to help other people. We know that because he loved the TV commercials that you see about organ and tissue donation. If one came on and we were eating supper, Jayce would say, ‘Shhh, we have to watch this commercial.’ We always watched those.”

Jayce’s strong Christian faith has also been an inspiration to his family. He was baptized in the First Baptist Church in Wewoka when he was 10 years old. Paige shares, “Jayce read in his Cowboy Bible every night, and prayed for his family, friends, and the troops fighting overseas. He had a really neat Christian walk.”

The entire community was stunned by Jayce’s sudden loss and has rallied around his family to show their support. Along with the cards, letters and newspaper articles, the Cross J Events Center near Wanette, Oklahoma has held two Memorial steer rides to honor Jayce. In Wewoka, Jayce’s family, friends and business leaders joined together to make one of Jayce’s dreams come true. On April 3, 2007, the Jayce Ray Sheffield Skate Park was dedicated and opened to the public. Hundreds of people gathered together in Jayce’s memory to eat birthday cake and hot dogs, and witness the first skateboarding tournament at the park. 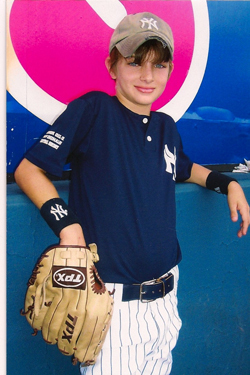 ​The Sheffield family graciously shares the following tribute
​they wrote for Jayce:

How blessed we were to have such a wonderful, healthy, little boy in our family for twelve short years. You visited 28 states, one foreign country, attended two O.U. Bowl Games and participated in almost every sport imaginable. You were even able to complete your dreams of watching the New York Yankees play on their home field and riding a bull for eight seconds. Your beautiful blue eyes and caring personality allowed you to be friends with people of all ages, and your love for animals was never ending. Born to us on Easter Sunday, we are comforted by your spiritual walk with Jesus Christ. Because you always wanted something in Wewoka named after you, a memorial skate park has been built for kids to enjoy. Your sudden four-wheeler accident made us realize how much you taught us. Thank you, Jayce, for leaving us with memories that will last a lifetime.

Jayce lived more during his twelve years than most grown-ups do in a lifetime. With his passing, Jayce’s generous gifts have saved and improved many lives. In this life and beyond, Jayce continues to be amazing.